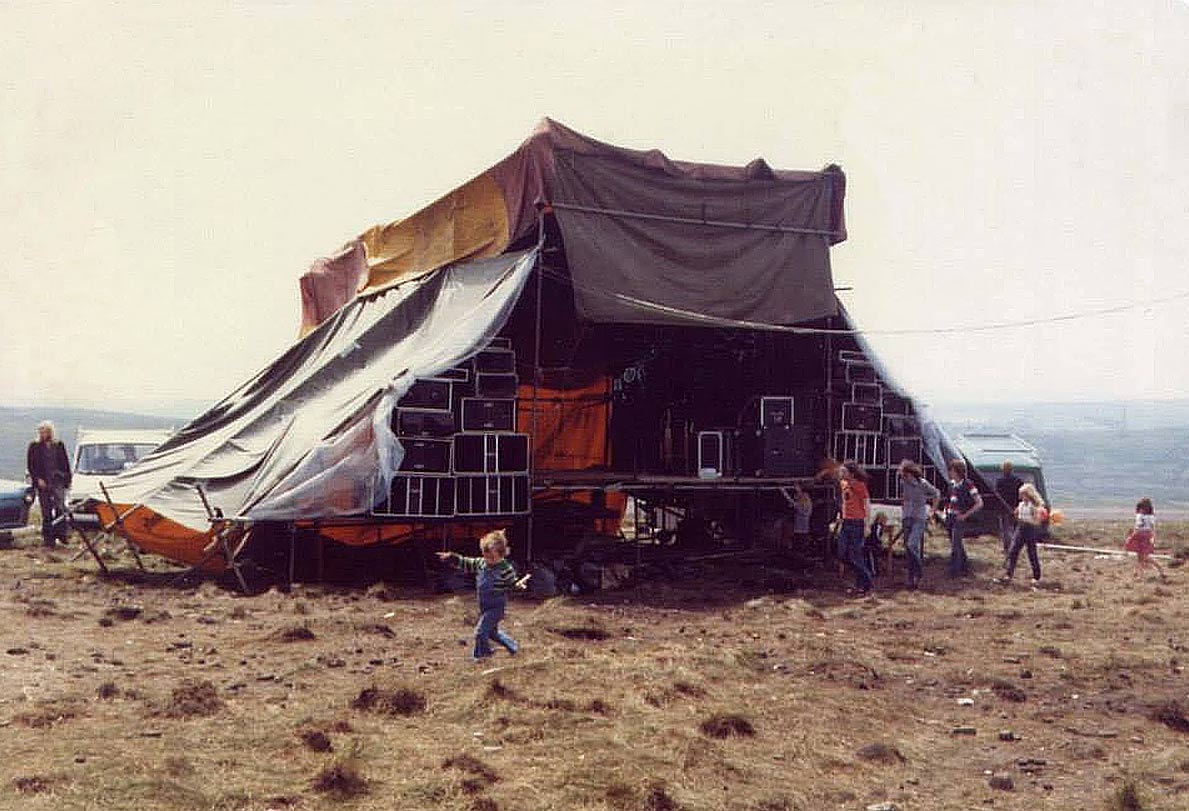 Pickup bank (81) was a nightmare, its high up in the misty northern hills overlooking Blackburn and we sat up there for two weeks in squelchy mud and soggy low cloud. A bit grim to say the least - lots of the convoy travellers were coming down with Hepatitis (infectious not intravenous) and many of the dogs were dying from Parvo which is a dreaded doggy aids type thing - uuugh !!.Its one festy that I have no wish to return to should I win the lottery and buy a time machine from woolworths.

was driving a car ahead of the convoy and saw some other cars and Van's stopped at the top of a hill on M6...Staffordshire?...they were all listening to CB radio..noticed there was no traffic going north..then in the distance the convoy appeared spread out across all 3 lanes and the hard shoulder with a massive traffic jam following interspersed with lots of flashing blue lights...amazing sight..spotting us the convoy pulled over which let the pigs through who attacked the lead vehicle so someone blocked the M6 with a Chinese 6 and the pigs let us go to Lancashire..

. . it was def before mobile phones . . we were lining up to leave Inglestone , i was on my motorbike , the Bump came along and asked me to go to May Hill and tell some people in a bus up there , to meet with the convoy on the first motorway services . . . .so i did that , people on May Hill were ready to go and we met the convoy as planned . . . . . Lesso was on his trike , Burlington Bertie on a 400/4 and me , we were supposed to be the m/cycle outriders

. . . when that bus pulled across the m/way i got off the bike and went into another bus for a cup of tea , lol , it was like coming in from some futuristic motorway horror movie into somebodies relaxed joint smoking living room , with tunes and a burner and a nice mug of tea , then shouting , engines , and we were off again into the night . .

I was on the convoy that travelled from Stonehenge to Deeply Vale and then on to Pickup Bank.

We were driving North up the motorway and I remember that all the service stations were cordoned off. The convoy took up several miles of the motorway and all you could see in  front and behind for miles and miles were the blue flashing lights of the cops. At one point the convoy stopped. We had outriders who told us that, as our vehicles ran out of fuel at the back, they were being trashed by the police. I was in a bus roughly halfway along the convoy and our driver decided to pull the bus right across all the lanes of the motorway. Within minutes a half dozen cop cars and vans screeched up to us. Within 5 minutes the bus was surrounded by at least 6 deep policemen. They tried to hook up a Range-rover to the front of the bus to tow it away. The bus was full of us all singing songs, and watching in disbelief as we were surrounded by cops. The door was barricaded so they couldn’t get in. It was surreal. They abandoned the attempt to tow us away (what could a range rover do at that angle with all that weight, it was a dumb move on their part, but I guess they were desperate). It was late so there was very little traffic on the motorway, they had probably diverted as much of it as they could, but there were still a few people held up, and maybe because of that they restrained themselves from breaking our windows and dragging us out. The only real scuffles we had had at that point were at Inglestone. Finally our driver decided enough was enough and he started to reverse. All the cops leapt out of the way, and with that the whole convoy began to roll again.

When we were diverted from the deeply vale site there was a bit of confusion, but whoever was in the lead knew of a few different options. As we we left deeply vale (was that the Greater Manchester Police Area?) we moved into Lancashire and the police presence dropped drastically. As we approached the pickup bank site, which most of us had never seen before, we stopped by the side of the road to figure out how to get onto the site. The then sole cop car, rapidly blocked what appeared to be the only motor-able entrance. So there was a standoff. I remember many of us milling around outside our vehicles, with Bill Normal, issuing battle cries and talking battle strategy. After about 20 minutes, we saw another part of the convoy that had gotten delayed approaching up the hill from the distance. The road curved around, so as they approached they could clearly see the standoff along with the lay of the land. I think it was Gypsy Dave in the lead Vehicle, which was an old military 4x4. They were coming up slowly, reconnoitring, then Dave made a strategic decision and entered the site from the side in a gap between the other convoy vehicles, and as we held our breath, successfully and very bumpily entered the site along with all the convoy behind him. The cops made a futile attempt to stop it but it was too late. To loud cheers we all mounted our vehicles and in sheer pandemonium we entered the site.

I was with ‘Manik’ Mark and Sarah and the kids, including the later well known 'little Chris’ (who then teamed up with another kid, Willem, they had a bender at Inglestone the following year, a couple of right characters, 14 year old convoy wheeler dealers). I had made a Sioux tipi up on May Hill from a tarp given me by Dazzer, when we were squatting in Lewes with George and gang. I had previously been traveling with Moff, Jane and Russ, the Geek (the first ‘licensed' drongo on the festie scene), bender Dave, Tom, etc. from the green and yellow tipi.

I teamed up with Mark and Sarah when the tipi was finished. Mark had a little blue pickup to carry it around on. The poles only just fit on top of his van, it looked a bit funny, they were about 27 feet long. We sold the lodge to Pikey Pete in ‘78 as far as I remember. Anyway, we moved onto the pickup bank site and it was difficult to find a place to pitch the tipi, the land was all up and down and very windswept. I don’t remember how many days we were there. But one evening it rained torrentially. The kids were all tucked up in bed in the lodge when I went outside, only to see water welling up out of the ground in front, and flowing towards the door. I woke everyone up and we only just got everything into the van, including the carpet, before the water flowed in over the drongo pit and into the fire which hissed and died as the wood floated across the tipi floor. It was a strange site….

This was the end for this particular festival, it appears that the bad experience at the site in 81 ( the hard drug use , sexual violence and hostility of authorities -which was a carry over with problems encountered as far back as Deeply Vale 1979 ) was the final straw. However, as a postscript, Paul , an ex-member of the convoy sent me this

Despite Pickup Bank being recorded on your website as last staging a festival in 1981, the site was in fact used as a camp for The Convoy in 1984, post Stonehenge and Montgomery festivals, although I can't remember if any organised stage was assembled.  We camped there for about 2 weeks before a move to a site on the old Northumberland/Cumberland/Durham border - the name escapes me now, but it is a site of antiquity with a Celtic monument or ring.  Following on from here, we moved into Yorkshire to the now infamous Nostell Priory festival, where a taste of what was to come in 85 was experienced at the hands of theYorkshire Police, who had just completed an operation (now also infamous) at the Orgreave Coking Plant.

Anyway, great site and loads of nostalgia for me - Deeply Vale 1978 - my 1st free festival.  I remember Hillage coming on stage as the rain stopped.  Magic.

Be lucky, healthy and wise.  I'm still with you all every day of my life.

Tear in the eye and lump in the throat.

Any info to add ?-well don't just sit there Contact us

Any info to add- well don't just sit there ! Contact us

Free festivals and small fayres held in the United Kingdom between 1967-90.

The aroma of a free festival -by Roger Hutchinson

Travellers Tales Convoy Steve's tale of how the freaks outsmarted the fuzz at Greenham common.

Acidia Lightshow Lightshow for Windsor festival and Stonehenge in the 1970s.

Any info to add ?-well don't just sit there , Contact us