Apparently the festival was the first in the UK to be videotaped. Given that 43 years have now passed and that if we wait much longer a goodly portion of those who attended will have snuffed it, we would have thought that it was high time that everyone just got together and made some sort of commercial release before someone DOES get hold of the footage and puts it up on YouTube . So far the only footage out there for people to buy is the Pink Floyd Atom Heart Mother stuff. For details of the video company that was at Bath and which acts were filmed , visit the Festival video link .

There are also a couple of very short 8mm films of Bath, we have copies of two but are always looking for more, we can't pay anything for them , but those people who have entrusted copies into our hands have NOT been ripped off, apart from using stills on the site we have never distributed them for trade or cash and we won't sell you copies. We will put people in touch with those who have the originals if we think you are on the level and will pay the people with the footage to use their work in documentaries or legitimate projects. There are reports that 30 minutes of Led Zeppelin's performance and interviews backstage exists , but so far its not surfaced commericially. 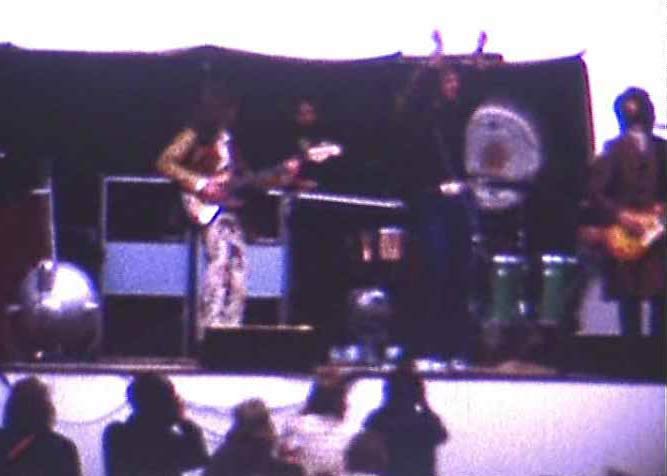 Jochen Laschinsky has also unearthed a minute or so of 8mm footage which contains several short clips of Canned heat, Zappa, Santana and Zeppelin. Unfortunately , as he was shooting into the sun, the footage is extremely dark , we have included stills taken from the footage on the relevant pages of the site and the example above is what its like at its best . This footage was remaining in house so Jochen could retain the copyright, so sorry folks, its not available here, although apparently its emerged on Youtube, where there has been a series of very rude messages and reciminations regarding its release.