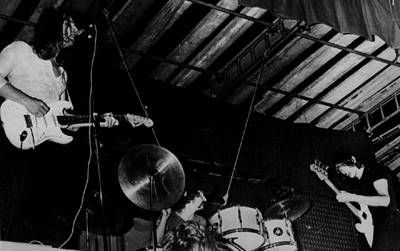 Several versions of this set are circulating, most probably from the same source and cut to fit tapes.. The longest version is presumably of the entire show, some 65 minutes in all.

Sound quality is largely very good, not a lot of hiss and good separation, the audience are noticeably quiet -presumably because many of them are asleep or bombed out by this late hour.


Set the Controls for the Heart of the Sun
Cymbaline
'The Journey' suite (The Beginning, Beset by the Creatures of the Deep, The Narrow Way -part 3, The Pink Jungle, The Labyrinths of Auximenes (cut/con'td), Behold
the Temple of Light, The End of the Beginning)
Encore :
Interstellar Overdrive
Audience tape . Very good to excellent quality. 60 minutes , several versions are circulating, which vary in length. The shorter versions seem to be missing Interstellar Overdrive.


Great sounding tape again, the same taper as the King Crimson show of the 9th perhaps ? The Set The Controls of the Heart of the Sun is up tempo and certainly gets to the heart of the matter in double quick time . Much gong smashing at the beginning and nice Wright keyboard stuff.

Cymbaline is up and down , quiet interludes and then big bass bombs from Waters and power chords from Gilmore , which are contrasted by the pastoral sections with dreamy little fills from Wright, and limpid bass drops from Waters, which seem to drift around for ever, before once again getting into high times with Cymbaline for the songs chorus.  A track to trip off into the galaxy and have fun with and which deserves better applause then it gets.

Waters then introduces The Journey, which he says they have been playing around the country on tour and which will be their last song for the night. The track announces itself to the sounds of seagulls and goes along predictably until it suddenly metamorphoses into Careful with that Axe Eugene , which is slightly distorted on my tape for about a minute until the sound level drops .At the same time the song itself also changes to its quieter portion , complete with wind effects . Overall this is a pretty short version. Without stopping the band then moves into The Narrow Way and the tape volume drops again to compensate for the increase in volume. Nice guitar from Gilmour on this number. My tape cuts there as I have it back to back with Crimson and there wasn't enough room to fit them both on a C90.

To view a huge number of top quality photos of almost all the bands at the 1969 festival , visit Robert Ellis's site ( note : you shouldn't copy Roberts photos -support his efforts to give us a record of the festival by buying his prints) 1969 Festival Menu Known recordings of the 1969 Plumpton festival.
With set lists and recording details if available.
If you have any more details of tapes of the event then Contact us