The Mysterious Case of the Lost Roll of Film.

In July 1970 , in Hyde Park , a 15 year old American on holiday in the UK found a roll of 35 mm film . It was unmarked, but he took it home with him and out of curiosity he paid to have the images developed. To his surprise they contained 37 colour images of a festival .....

Fast forward to Jan 2013 , I received a fascinating email from the erstwhile 15 year old, who it turns out was called Malcolm Cleary

When I was 15 years old, and in London with my parents (I lived/live in California) I found a roll of film in Hyde Park. The other day I was cleaning out some things and I came across the developed photos and the negatives. At the time I had developed the role of film but did not know what the subject matter was. I looked at them again and wondered if I could figure out where the photos were taken. Looking at the ukrockfestivals.com site, based on the stage and the surrounding hills it seems that they may have been taken at the Bath Festival of Blues and Progressive Music in 1970. There are 37 color photos, somewhat faded now, and the negatives. I am unclear of who took them but whoever it was seemed to have access to the stage area and back stage. Do you have any interest in these photos?

Do bears live in the woods ? Of course I was interested, for a start, backstage images from Bath were rare and these photos also promised a treasure trove of images of the film crews who documented the festival . Malcolm sent along the images and they are here for you all to have a look at and possibly identify the people who are featured . One of the reasons that I have continued to document these festivals, despite all the hassles from people who are impatient and rude , frustration at having material offered and then never acted on, spurious stories and the sheer lack of available material on occasions , is for moments like these. When a treasure is unearthed after many years and yet another piece of the festival jigsaw falls into place , still leaving many gaps , but nevertheless, fewer than before.

Enjoy what is now available for the first time to an audience after close to half a century and give thanks to Malcolm for the efforts he has made to provide us with these lost gems .

The action then shifts to backstage area of the festival . 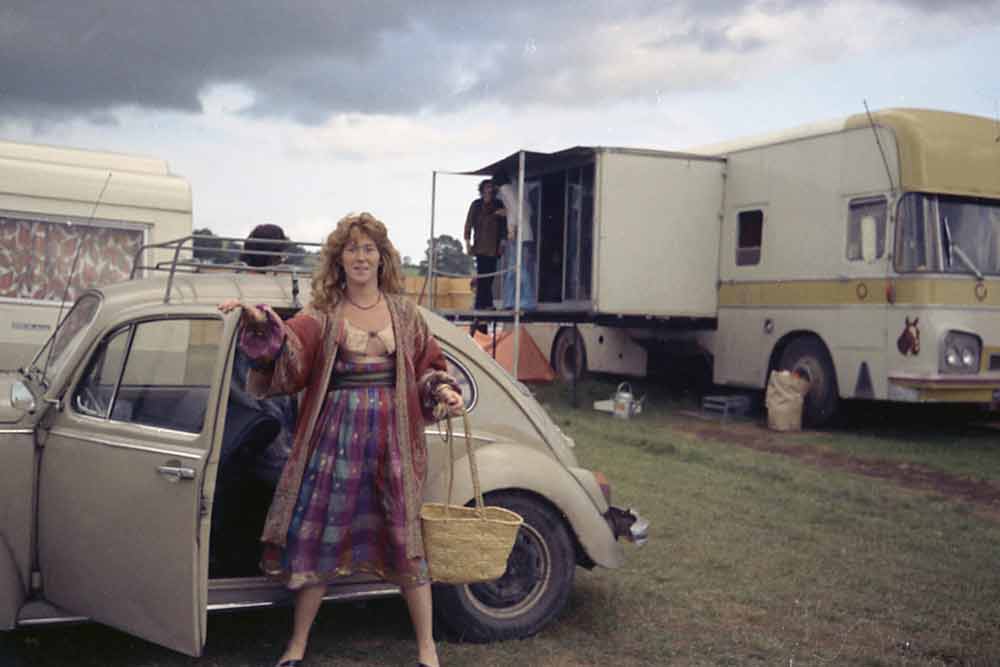 Arrival of one of the backstage populace. We also have some info about the vehicle in the background which is alas ,no longer with us......

"The photo of the "horse box" is actually a vehicle owned by a gypsy/smuggler/dope dealer/ thief named Taffy. It was built for MI6 and used by a British spy named Greville Wynne, whose profession and cover was that of electrical engineer, to tour East Bloc trade fairs. Wynne was arrested in Budapest 1963 in connection with Soviet spy Oleg Penkovsky .The vehicle had side panels that telescoped out, providing extensive exhibition space.....or in this case, room to hang out.
Although I was at the Bath festival, I didn't run into Taffy and his truck until the Phun City festival at Worthing later that summer. He was parked behind the stage, hosting the Angels and various musicians, and I had a lot of top quality Afghan hashish.
After moving to Amsterdam in 1973, I again ran into Taffy and his truck. We became friends and " business " associates, and the truck made various smuggling runs to Afghanistan and later Yugoslavia. In 1977 an angry customer ( Taffy was a well known ripper) torched the truck, more or less destroying everything but the cab."