Formatted at 1280 X 1024 res, lower res will result in some formatting errors in page display .

The Northern Rock Against Racism Festival .

Unfortunately, Dylan had decided to play his first UK concert since the Isle of Wight Festival in 1969 on the very same day. The organisers were worried about Dylan swamping the Northern Carnival in the music and other press and this did happen. However, every cloud has a silver lining and this one was in the form of Graham Parker and the Rumour, at the time the darlings of the music papers, wanting an open air practice session prior to supporting Dylan at Blackbushe. Parker's people approached RAR and asked if they could do a set on the Thursday before the carnival proper on the Saturday.The organisers were obviously keen to have him but had to get the City Council's permission. They sold it to the council as a low key dress rehearsal and the city fathers were fine with that. 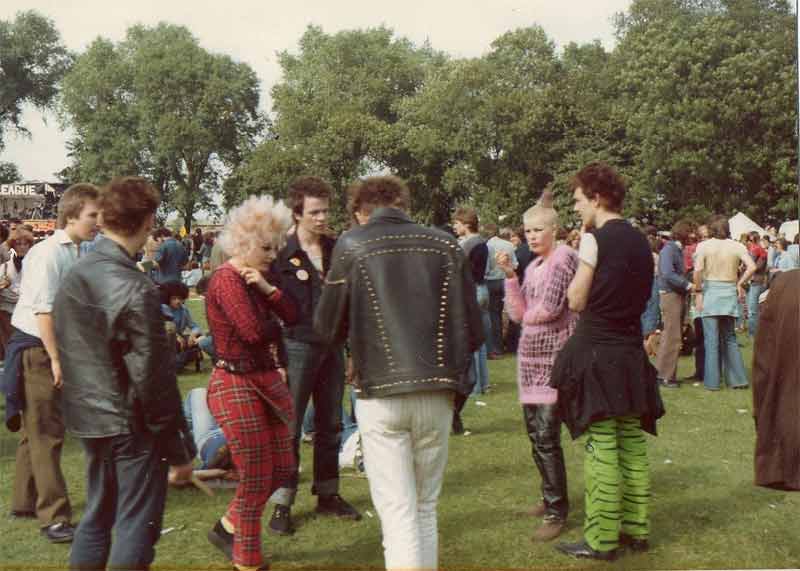 Hangin' in the park before the show © Geoff Brown/Bernie Wilcox/Chris Hewitt
A further "fill-in" gig was held on the Friday at the UMIST Students' Union with the Rich Kids (Glenn Matlock's post Pistols band with Midge Ure) with the Fall in support. In the end, the Parker gig wasn't too well attended due to the last minute nature of the thing but they played a great set that really pleased the fans that turned up. The Rumour were complete with Brinsley Schwartz on guitar, former Brinsley's keyboard player Bob Andrews, John "Irish" Earle on sax (who played on Thin Lizzy's live version of Dancing in the Moonlight). Albie Donnelly from Liverpool band Supercharge came on as a guest.

By the time all the marchers arrived, boosted by those who simply were there to see the bands, it was estimated that around 40,000 were present. Local Moss Side reggae band, Exodus played a somewhat subdued set, the Buzzcocks who were at the peak of their punk-pop popularity went down a storm, Lancaster-based white reggae band Chinastreet set the scene for Steel Pulse, at the time, Britain's leading indigenous reggae band who finished the day with a superb set. The encore 'Klu Klux Klan', was a combined effort – with members of Chinastreet, Exodus and the Buzzcocks playing together – all united against racism.

The whole thing went from conception to performance in 10 short weeks. 40,000 people had a lovely day and for weeks before and for months afterwards you couldn't walk through Manchester without seeing tons of kids wearing anti racist badges which had a major effect on how they thought about racism and probably changed their views and in turn, that of their kids forever.
Saturday's event was filmed by Bob Jones and Tosh Ryan but sadly the film was wiped due to radio taxi interference on the soundtrack however Chris Hewitt has some audio of the Saturday gig along with an audience cine film of two Parker numbers from the Thursday !

Fast forward a week later to Deeply Vale and RAR were given the Saturday of the 6-day festival to put on RAR supporting bands including Misty in Roots, The Ruts and the Fall.

Northern Carnival Against the Missiles 1981